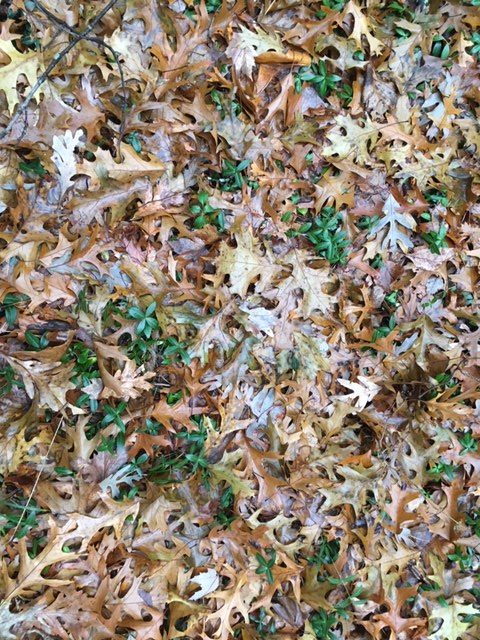 When we left town to visit our son in Raleigh, North Carolina, for Thanksgiving, the trees around us were still bedecked with plenty of leaves. High winds over the course of the holiday weekend brought almost all of them down. What amounted to a great, russet mattress covered the ground upon our return.

Raking leaves in a place where trees dominate the landscape can seem like an exercise in futility, like trying to hold back the tide. I wrote a brief poem about it:

Raking leaves in a forest:

No art is perfect

Fallen leaves unleash the inner suburbanite in some of us. The month of November practically roars with the mad dog snarl of leaf blowers, as gangs of yard workers travel from house to house. The sight of these workers, ambling about in a desultory manner, blasting leaves into great, speckled clouds that settle, finally, along our roads, makes for a cockeyed spectacle. The amount of energy expended bears no relation to the physical exertion required.

Raking leaves is a kind of chore for many of us, which is to say a hassle. I’ve known people willing to work long hours searching for a cure for cancer, or peace in the Middle East. But yard work? Anything but that!

I, on the other hand, prefer to think of the woods as my gym. Armed with my trusty, hardware store rake, I can work up a sweat in less than an hour. Effectively throw my back out of alignment in two.

Which may be another way of saying that I find myself ever more attracted to arguments for letting fallen leaves lie.  According to Penn State’s Department of Ecosystem Science and Management, (https://ecosystems.psu.edu/research), forest soils are among the healthiest soils found on the planet. That’s because the forest ecosystem is constantly recycling organic matter, of which leaves are the most ubiquitous. The forest floor is a naturally occurring composter. On the surface is what is called the duff layer — leaves and twigs, the stuff we rake — which, over time, decomposes and enters the soil as nourishment.

In Autumn, as leaves get ready to fall, they serve as collectors for tree nutrients. This makes every leaf a kind of arborial vitamin pill. The nutrients in leaves feed the soil, ultimately finding their way back into the roots of trees from whence they came.

Animals, of course, depend on fallen leaves. Those insects and worms are food for birds and frogs. Deer treat them as if they’re made from memory foam.

We used to burn leaves. The aroma was as sure a sign of the season as wondering when or if the Bears could find a real quarterback. Unfortunately, that aroma was a byproduct of air pollution. So we pile leaves by the roadside now and crews are dispatched to suck them up. It makes for a tidy look — as if we people actually knew what we were doing.