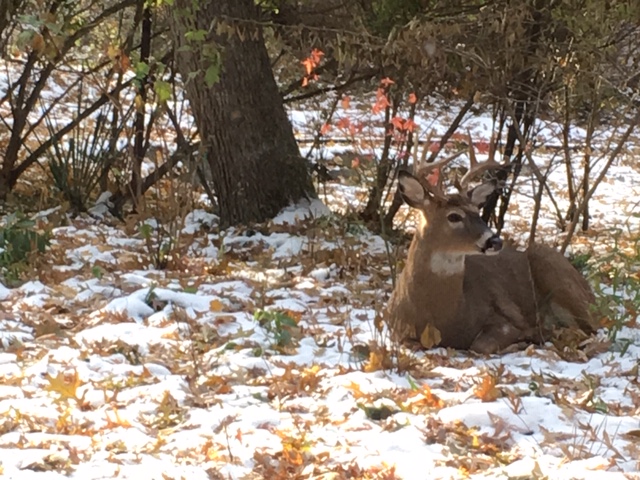 There’s a buck deer resting in our front yard. It’s rutting season, the time of year when, if you’re a deer, the great outdoors turns into a leafy love shack. Bucks, it is reported, will travel miles in pursuit of a doe, losing as much as 25 pounds during the course of mating season.

A doe is resting nearby. She faces away from the buck, as if she can’t be bothered. Is she being coy? Or simply exhausted?

Deer in these parts have become our neighbors. Fifty years ago, a deer sighting here was rare enough to be considered an almost mystical occurrence. Now their presence is commonplace. They eat from birdfeeders off our decks, peer into our windows, gently surprise us while we’re doing outside chores. One spring a newborn fawn, able to walk in about an hour, took shelter in our outdoor shower.

Some people consider deer a nuisance, or worse. Gardeners are infuriated because deer treat flowerbeds like endless buffets. A typical deer will eat about 12 pounds of plants per day — they devour anything that flowers. Hostas, which flourish in shady environments like ours, are special favorites. Once they show their leaves you have to spray them (a mixture of mint and garlic seems to work pretty well) on an almost daily basis. Otherwise you’ll look outside one morning to see stalks where greenery used to be.

Deer can be particularly hard on native plants and trees. This is a problem; as native flora declines, invasive species, like bittersweet vines and Japanese barberry shrubs can take over, making gardening around here sometimes seem more about what you have to cut down and pull up than put in the ground.

Apart from coyotes, our deer have few predators. Though disgruntled homeowners call for culling, just how this might work in a community where houses are being built bigger and closer together than ever is anybody’s guess. All we need is for some suburban Deadeye Dick to haplessly pull the trigger and put a bullet in the prosperous posterior of his neighbor next door.

I choose to enjoy the company of deer. A few weeks ago, around the dinner hour, Melli and I heard a sound like clap sticks, a wooden percussion instrument, across the street. A pair of bucks were sparring, lowering their heads and locking antlers. They would butt up against one another, break, take a few steps, pause and consider, then take another crack. There was a formal, slow motion quality about what they were doing that reminded us of fencing. Whether this was about establishing dominance, or just a workout, was unclear. What struck me was how civilized they seemed.

Seeing deer may be an everyday occurrence, but that doesn’t make it less magical. The other day I saw three does coming down a snow-covered hillside, their coats blending perfectly with the tones of fallen leaves, tree bark and frosty patches, so that their movement appeared like a kind of choreography, appearing and disappearing as they descended to the road below. I have felt the air stream past my ear as a full-grown doe has come flying out of the woods behind me. And I have looked up to find one within arm’s length, glanced away and found her gone.

Who’s to say their claim on this place is any less valid than our own? People, after all, are the ultimate invasive species.