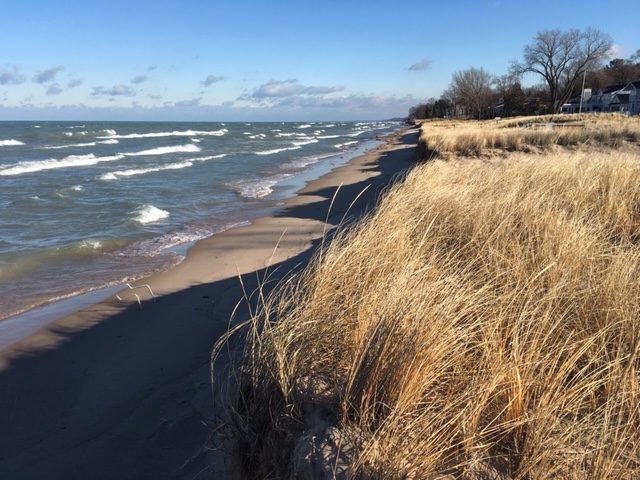 People say change is good. Well, Lake Michigan is putting this bromide to the test. The water keeps rising, the beaches keep eroding. Houses and other lakeshore structures are being undermined.

From Mackinac Island, where Lakes Michigan and Huron meet, to what’s left of the beach here in Long Beach, unsettling stories and images keep coming in. A stretch of our shore road is currently closed so that workers with concrete trucks and cranes can try to reinforce houses whose seawalls have been breached.

At our end, the foredune has been gashed away in massive chunks by a series of storms that started on Halloween, with fourteen- foot waves. Where going to the beach used to mean sidling down a gentle slope on the way to the water’s edge, now there is a sheer escarpment and a drop of what looks close to seven feet. At night, as it continues to churn, the lake often sounds like a giant turbine, a cosmic white noise machine.

Yesterday, a friend who keeps a sailboat moored in Michigan City’s harbor told me she and her husband were warned that if the lake keeps on like this the Port Authority may have to close the marina next year.

Engineers and scientists who study the lake try to be reassuring. They say Lake Michigan levels are cyclical, that the waters rise every 30 years or so. Sure enough, the last time levels were as high as they are now was in the late 1980’s. The Red Lantern Inn, a lakeside restaurant where my wife and I were married, fell in. But if this 30-year pattern holds, we can expect the lake to begin receding in due time.

Fine. But this doesn’t necessarily mean things will go back to being they way they were. All the building that’s taken place along the lake over the past 30 years has affected the way shoreline sand drifts and collects in different places. Seawalls, revetments and breakwaters contribute to eddies and erosion as sand gets washed further down the beach.

What’s more, climate change could be shivering the predictability of the lake’s historic cycles. Precipitation in our part of the country has increased 10 to 15 percent over the past decade due to the frequency and intensity of storms coming up from the Gulf of Mexico. This might help account for the whipsaw-like way Lake Michigan went from one of its lowest ebbs in 2013 to threatening to set high water records now.

We say change is good. Most of the time, though, we act as if things will stay the same. People who built dream homes on foredunes overlooking the beach probably never imagined that, one day, surf would be pummeling their foundations. They are understandably alarmed. Nature is bursting its seams. Something must be done.

But what, exactly?  In Portage, the mayor is calling for sand replenishment. He points out that the Indiana shore is the state’s top tourist attraction. But the cost could run to $20 million, and in other parts of the country replenishment projects have been washed away by subsequent storms. The Army Corps of Engineers is said to be studying the problem.