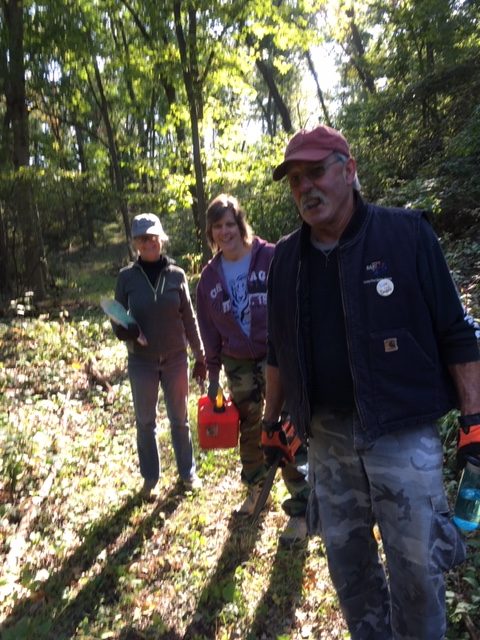 Through some woods on the other side of our house and up a sandy slope, gray with the accumulated compost of countless oak leaf generations, lies Moon Valley. Named because on those nights when the moon is bright, the valley seems to catch and store moonlight as if it were a primal energy bank, Moon Valley can be magical.

I wasn’t yet ten when my neighbor, Dave Sheely, introduced me to the valley. Dave was two years older than me, and an experienced duneland guide. We’d fill our army surplus canteens and, in Mark Twain’s parlance, light out for a day’s exploring.

Dave and I are still making memories back there. Earlier this month, Dave, his wife Lisa, Melli and I spent a Saturday clearing trails in a part of the valley called Stockwell Woods. Stockwell is a parcel owned by Save the Dunes. It’s a rolling landscape with a towering oak canopy, an understory including sassafras and witch hazel, and, on the ground, plenty of blueberry brush and knee-high ferns.

In Spring and early Summer, Stockwell and the woods adjacent to it are home to an abundance of wild flowers, most notably purple lupine — great washes cover parts of the valley floor. Botanists hiking here have remarked rare and unusual plant varieties as well — suggesting that Moon Valley shares many of the same ecological attributes associated with the Indiana Dunes National Park.

Although Save the Dunes is Stockwell’s current owner, it has always belonged to preservationists. Back in the 1950’s, when Dave and I were first exploring, Stockwell’s being in private hands spared it being stripped and mined for sand, a fate that befell large portions of Moon Valley. Much of the valley has recovered since then. Oak trees and wetlands have reclaimed space that once was bulldozed.

But now Moon Valley is an attractive target for development. Beginning in the late 1980’s, the western end of the valley was turned into the vacation housing project, Beach Walk. Lately, another development, Whispering Dunes, is under construction. This has turned Stockwell into a crucial strategic asset, its location preventing developers from constructing an east-west through road from one end of the valley to the other.

Some of us would like to see the northern-most part of the valley conserved for public recreation with a continuous trail running from the Long Beach nature preserve off Karwick Rd. west to Stockwell Woods and beyond, to where current development is taking place in Michigan City. This would make what is already extraordinary and invaluable green space a great public resource for residents and visitors.

When we were clearing trails, Dave and I paused from time to time to rest and take stock. Early Autumn sunlight came through the trees overhead, the air was clear and tasty. As kids, we never needed anyone to tell us how special this place was — we could feel it down to the soles of our feet. In the years since, we have found plenty of reasons to back those feelings up. That’s useful. But the feelings were first; and they’re strong as ever.

8 thoughts on “Letter From Michiana: Moon Valley and Stockwell Woods”