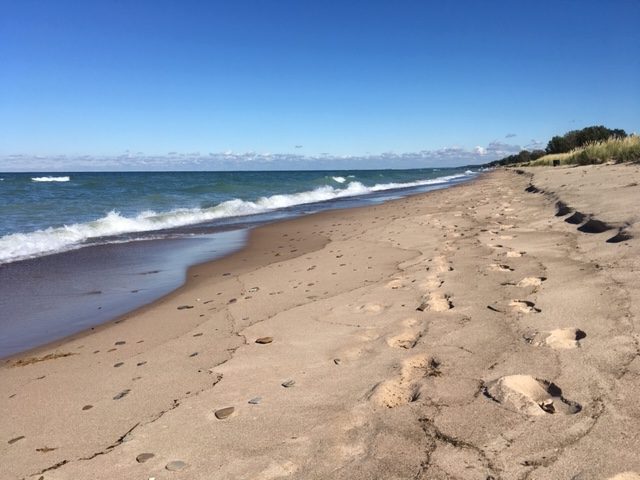 It was the kind of night “not fit for man nor beast.” The air was drenched from a full day’s rain and shivered by a frigid wind. The heavy limbs of oak trees high overhead shuddered, their leaves rattled like gravel down a tin chute. Probably not what the Harvest Moon party planners had in mind.

The setting was Friendship Botanic Gardens in Michigan City. The night before, the temperature had been a balmy 70 degrees. We were supposed to be in light jackets, enjoying the autumnal air. As it was, everybody was bundled up; if you’d thought to wear a hat, you didn’t consider taking it off. The bartenders’ teeth made a chattering chorus.

The incredible thing: everybody showed up. More than a hundred people, somebody said 150. But then people have been showing up for the Long Beach Community Alliance for years now.

The LBCA is the grass roots group of families that formed in 2012 when certain beachfront homeowners claimed their property rights extended to the water’s edge, allowing them to kick people off the beach. When it was pointed out to them that this right did not, in fact, exist, they threatened to sue the town of Long Beach. And when it became clear that the town did not have the gumption to face such a suit, citizens organized to do battle themselves.

The story of what ensued has made Indiana history. The LBCA was joined by Save the Dunes, the Environmental Law Center in Bloomington and the Great Lakes Alliance. At one stage, Indiana’s Attorney General even got into the act. The case was heard in one court after another and, at every level, the LBCA and its allies prevailed. When it finally made its way to the state’s Supreme Court, the justices there ruled unanimously in favor of the LBCA’s contention that the beach belonged to the State of Indiana and, as such, was part of a public trust.

The LBCA, in other words, made history by making history clear.

But money doesn’t care much for history. And this is a money-besotted time. A time in which a few people control a disproportionate amount of wealth — in some cases are wealthier than the communities in which they own property. This is the very definition of what some people like to call clout. Clout means that if you don’t like something, if the rules are against you, you can use your money as a club to bludgeon people until they give up. Money makes the rules.

Having lost in the courts, beachfront property owners have turned their attention to the state legislature, where they hope their money can turn the heads of some of our more impressionable lawmakers. Since the law is not on their side, they want to buy a new law. They tried to do this in the last legislative session and failed, but they have deep pockets. Wealth makes them like zombies: they keep coming back.

They should have seen the crowd partying on that chilly night in Friendship Gardens. The weather was nasty, but people showed up to raise the funds necessary to keep fighting, if that’s what it takes. Memories are made of this. Luckily, you can make a donation from the comfort of your home.  Go to: www.lbcall.org.