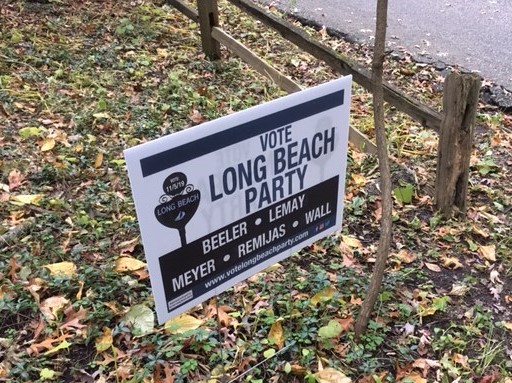 On municipal election night four years ago, Long Beach Party supporters gathered at the old Michigan City Yacht Club to await the returns. It didn’t take long. Nobody needs to stay up late when a candidate can win a seat with less than 400 votes.

The Long Beach Party fielded a slate of candidates for the five seats on the local town council. Running a slate of candidates like this was a seemingly new idea for Long Beach. But frustration among many town residents over what was perceived as the previous council’s servile crush on developers and realtors created an uprising.

There were really just a couple of principles uniting members of the LBP: all of us were for trying to protect as much of our community’s natural environment — the lakeshore, woods and remnant dunes that give this place its unique character — as we could, and we also wanted to see the town’s existing ordinances consistently enforced. This approach struck a chord. All five LBP candidates were elected.

That was the beginning of what proved to be a contentious passage. Small town government turns lout to be like a game of telephone. With little or no local media coverage, a lot of what goes on is broadcast via word-of-mouth or through various social media platforms. The Rashomon effect — the disconcerting way each of us has of seeing the same thing differently from one another — runs rampant.

Town council meetings became insufferably confrontational. There were shouting matches. Accusations and insults flew. The level of civil discourse in our town devolved, in other words, to what’s become par for the course across most all of America, from condo boards to presidential campaigning.

Calling this a drag puts it mildly. It’s really amazing that anything gets done when you consider that the folks who agree to take on the governance of a town like ours do so as volunteers. My neighbor, Joy Schmitt, won a seat four years ago; she’s a biochemist. Little did she know she would find herself drafting a parking ordinance, or having to study up on sewers when septic tanks, rashly installed on the lakeside of certain homes, were undermined by rising waters.

Joy chose not to run for a second term. But the Long Beach Party fielded another slate of candidates. The opposition put together a slate of their own, promising to “reunite” the town. They claimed that the LBP was “running roughshod over the community.” It sounded a little like they wanted to make Long Beach great again.

We awaited the results in the bar at Swingbelly’s, a too descriptively named restaurant on the edge of town. This time there was no sweep. But LBP candidates won a majority of the five seats; one opposition candidate, Mary Lou McFadden, was elected, as was John Kocher, an independent who ran a campaign that sounded in harmony with LBP principles — he was the second leading vote getter. LBP candidate Nick Meyer led the field with 365 votes.

A local election like this one can be unsettling. Makes you wonder whether you’re in tune with your neighbors. Or not. This year’s election demonstrated that, for most folks, the Long Beach Party’s principles are headed in the right direction. All of us at Swingbelly’s breathed a sigh of relief. And we got home early.

One thought on “Letter From Michiana: Long Beach Party wins”