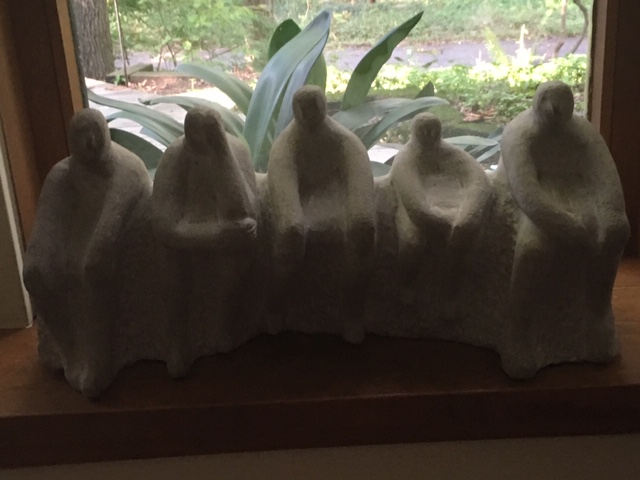 Drove down to Plymouth last week to give a talk at George Schricker’s performance space, Wild Rose Moon.

Called simply “the Moon” by those who know and love the place, Wild Rose Moon is located in Plymouth’s historic district, an enviably preserved Main Street-style neighborhood with buildings dating back to Indiana’s so-called Golden Age of the 1880’s. It took years for George to rehab the building where the Moon is now; he thought, at first, of making it a restaurant. But then he had another idea.

Ideas are a big part of what Wild Rose Moon is about. When you walk in the door, you find yourself in the kind of club people flock to in cities like Chicago or NYC. George is a longtime folksinger and storyteller and so it makes sense he decided to create a venue where those art forms might find a port of call.

But Plymouth is not Chicago, not by a long shot. It’s a town of a little over 10,000 people — not exactly on most performers’ tour schedules.  George knew going in that for this to work, he would have to think more holistically than most big city impresarios. He would have to make the Moon an indispensable part of a larger community.

For George, community is a big idea. We’ve known each other for almost 40 years — since the days when we were both audio-visual librarians, screening 16mm films together back in the early 1980’s — and I can say that from that time to this, George Schricker has been as fascinated by what makes a community, how it works, and why it’s important, as anyone I know. For him, community is where our creativity as human beings comes from. It not only serves as inspiration, it gives the work we do, whatever that it is, meaning.

So George not only made Wild Rose Moon a venue for performers throughout the region, now throughout the country, he turned it into a multi-media project, including high quality audio and video recording capabilities and a public radio program that extends the Moon’s reach to about 5,000 listeners every week.

Local folks are learning professional production techniques through Moon internships. Moon programs are attracting audiences from across the region. And the Moon’s presence has encouraged a local developer to renovate a vintage movie house across the street. Synergies are being created that are serving to enliven community in Plymouth and beyond.

The Wild Rose Moon story dovetails with Richard Florida’s recent research concerning the role of the creative class in rural communities. Key among his findings is that the incidence of economic innovation in rural and urban communities is closer than might be expected. “If anything,” Florida writes, “the arts may be more important to rural innovation than they are to urban innovation.”

According to Florida, one in ten creative class members now live in rural communities; they make up 55 percent of the workforce in leading small communities; and nearly 100 rural counties in America rank in the top 10 percent of counties overall with a high share of creative class workers. “The arts in rural places are not just a byproduct of the scenery,” notes Florida. “They play a key role in spurring the innovation that ultimately leads to economic development and rising living standards.”

All this is not to say that keeping the Moon afloat is an easy undertaking. Even with enthusiastic community support for its various programs, finding financial backing for the ongoing costs of administration and upkeep are a chronic challenge. Too many funders at local and state levels still see the arts, not as the essential community-building drivers that they are, but as decorative — the icing on the cake.

They ought to ask George Schricker to tell them the story of Wild Rose Moon.