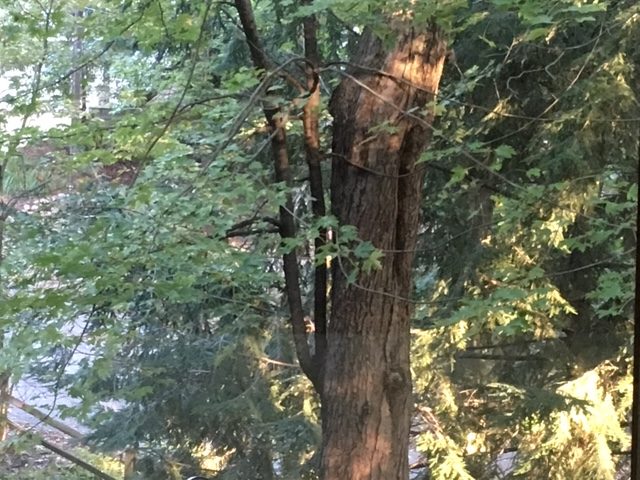 This week, at the United Nations, representatives from 60 countries will present ideas and proposals for dealing with Planet Earth’s climate emergency.

Last Friday, in Portage, around 100 students (and some adults) joined millions of people worldwide in a climate strike.

We also learned that the years 2014-19 were the warmest five-year span on record. And that fossil fuel (coal, oil, gas) emissions continue to rise.

Somewhere, in the middle distance, I hear a chainsaw. Not that long ago, a crew of workmen pulled up across the street from where I’m sitting now. They’d been hired by a homeowner to cut down a healthy oak tree. It took a day to bring the tree down. This kind of thing happens around here all the time.

Trees, it’s been found, may be the most effective collectors of carbon on the planet. The more we plant, the better off we’ll be. Where I live, on the edge of a still churning industrial heap — a ridge of steel mills, utilities and an oil refinery piled along the southern shore of Lake Michigan — it is not inconceivable that the trees in my neighborhood constitute an organic line of defense against various airborne toxins and the collateral damage that comes with what we keep insisting is economic necessity.

When I look out my window, I see green leaves and blue sky, the crisp light of a bright September morning. It is tempting to dial back the sense of urgency accelerating around what we know is happening to the world, and to us.

Yes, we know it. Something isn’t right. Maybe it’s not happening here the way it is in Houston, or Miami, or on the Alaska coast. Maybe we don’t feel it the way farmers, whose planting was rained out this spring, or whose fruit trees were frozen hard last winter, feel it.

But we know it. We know it the way a smoker knows it every time she coughs. The way a gambler knows it when he can’t keep himself from making another bet.

We know it. Even the so-called climate deniers must surely get it by now. They, like so many of us, just can’t bring themselves to face how deeply we’re hooked. How much we have to change. Because the problem isn’t how many miles we get to the gallon, or whether recycling really works.

The problem has always been about freedom. Somewhere, somehow, we let ourselves make freedom be about consuming and being able to waste with impunity. Freedom, we decided, was about private property — doing what we damn well please. We bought it and if we broke it, we called it nobody’s business but our own.

So we like being able to leave the lights on. We run the AC all day and all night. We water the lawn when it rains. And we cut down healthy trees to have a better view.

It appears the students who went on strike last Friday see freedom differently. For them, freedom is more than the sum of their parents’ reckless habits. It means having a future they can count on.