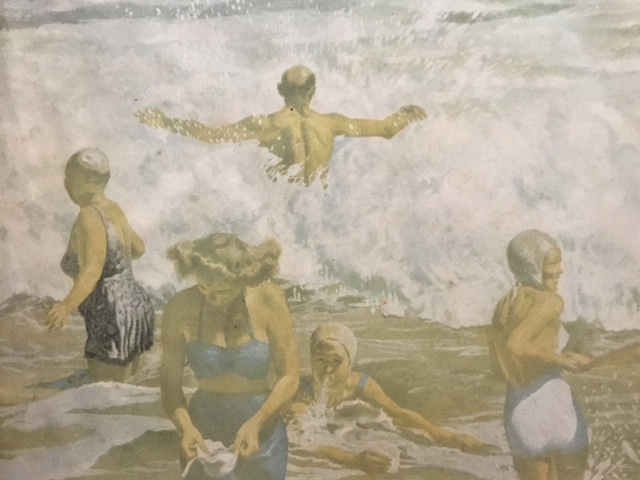 Labor Day: the end of Summer. Here, along the southern shore of Lake Michigan, the summer season starts on Memorial Day. Suddenly Illinois license plates are as common as the cicadas that cling to tree branches and whose husky corpses litter decks and driveways. The beach road near my house becomes a recreational mash-up, with gangs of urban vacationers obliviously showing off the latest styles in freewheeling locomotion.

Summer felt abbreviated this year. June is remembered as being wet and glum. The lake didn’t warm up enough for swimming until late July. This didn’t deter our neighbor Vince, who, rumor has it, was seen coming back from the beach with a towel across his shoulders as early as May, but Vince has lake water in his veins. Cardiologists take note: this guy has the heart of a lion.

Even the days leading up to Labor Day were vexing. Although our local paper listed the lake’s water temperature as a refreshing 72, prevailing winds made waves as high, at times, as six feet. This prompted official warnings to stay on land. No joke, since, as of August 4, 28 people had drowned in Lake Michigan — up 87 percent over the same period twelve months ago.  Instead of riding the waves, we listened to them nights, as we fell asleep.

The weather forecast for Labor Day weekend predicted occasional bouts of rain and cloudy skies. An anticlimactic end, in other words, to a season that, like the Cubs’ sputtering line-up, never truly gelled.

It turned out the best was saved for last. As if embarrassed by its lackadaisical performance, Summer managed a high note on its final day. The air was bright and breezy, the chop manageable and, after an initial shudder, the water, as they say, fine.

Everybody wanted it. The beach was chockablock with striped umbrellas, folding chairs and towels emblazoned with designs intended to remind anyone not paying attention that life beside a great body of water is, well, groovy. Flotillas of kayakers plied their way amongst anchored speedboats and paddle boarders.  Little kids splashed and ran along the water’s edge. Grown-ups scuffed their heels in the sand or stood with ankles in the surf and talked, as grown-ups will, about all the strange and wonderfully incidental stuff that grown-ups talk about when they go to the beach.

For a moment it might have been the Fifties again. The sun on people’s faces, their travel poster smiles, the freshwater atmosphere away from school and the office, the worries and the grind. I remembered coming here when I was young, my family members assuming their beach personas via swimming trunks and long-billed caps, sunglasses and, in those days, the plastic skullcaps women wore to keep their hair dry. The beach was the only place we looked like this. And, at the end of the day, when we hung our swimsuits out to dry, seeing them, wet and empty like that, it felt like a kind of farewell.