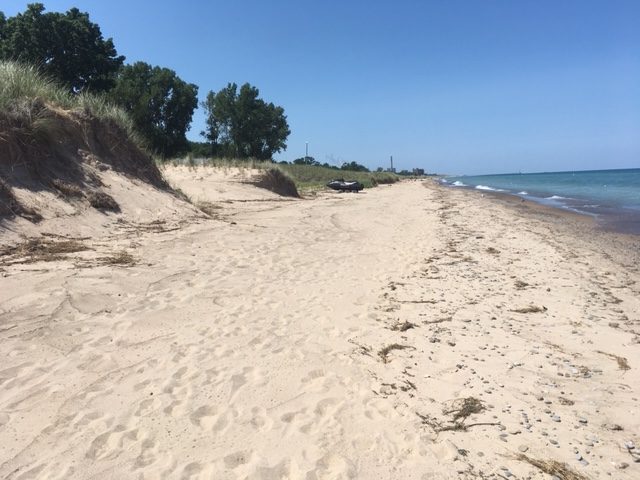 All politics, the garrulous party hack Tip O’Neill liked to say, are local. This may be true when it comes to campaigning for office, but when it comes to governing — well, that’s something else.

I was among the thirty or forty people who showed up for three public hearings held by Indiana’s Department of Natural Resources (DNR) in Michigan City on July 18. Each of these hearings was triggered by an application from a beachfront homeowner wanting, in one way or another, to alter the foredune or beach fronting their respective properties.

Most of the people in attendance, including Long Beach’s town council president, the attorney for the Long Beach Community Alliance, the chairperson of the Long Beach park board and the board president of Save the Dunes (my wife, Melli Hoppe), were there to speak in opposition to the applications. I even took a turn.

Three DNR employees made the trip from Indianapolis. Their job, as the word “hearing” suggested, was to hear what people had to say, take copious notes and report back to their “superiors” in the capitol city. As one of the DNR minions (the only one of the three who actually spoke) told us, those superiors would rule on the applications based on whether or not they impeded the lake’s navigability, posed a harm to the environment, and/or a hazard to life and property.

Someone asked how often those superiors (unnamed) rejected such applications. The DNR spokesperson said she could not recall that ever happening.

But that wasn’t all. After people started speaking, it became clear a gaping hole had been punched through the DNR’s three-point criteria. First, by the Indiana Supreme Court, which ruled in February 2018 that the beach up to the natural high water mark was held in public trust by the State of Indiana — a unanimous ruling upheld by the U.S. Supreme Court. And then by the town of Long Beach, which (with the initial encouragement of the DNR) passed its own lakeshore protection ordinance.

The trouble here was that, for reasons of its own, the DNR has refused to enforce or even truly acknowledge the Indiana Supreme Court ruling. This means that for roughly a year and a half, the state’s DNR has acted as if the state’s Supreme Court doesn’t exist, that its ruling never happened.

Instead of helping towns like Long Beach explain to property owners what the Supreme Court ruling means regarding their property or, for that matter, even fully informing themselves and their staff members about the state’s history and law, let alone enforcing that law, the DNR has buried its head in the sand.

To say that this has created confusion is an understatement. But the DNR’s willful passivity has also created a window of opportunity for people eager to press their advantage and claim private rights that don’t legally exist. Seawalls and stairways have been built on public land and dunes have been bulldozed in violation of local ordinances.

As was repeatedly pointed out, since the beach up to the natural high water mark is public trust land, the DNR cannot convey that land to private interests, nor can it curtail the public’s right to enjoy it.

And since the dunes above the natural high water mark are subject to local ordinances, like Long Beach’s lakefront protection ordinance, the DNR has no jurisdiction — no right — to give a property owner permission to bulldoze a foredune between their house and the beach.

The DNR has an office and a staff in Michigan City. You’d think that members of that staff would have attended the hearings on July 18. But if they were there, they were incognito. You might also imagine that the DNR employees from Indianapolis would have had the curiosity, if not the sense of professional obligation, to set aside 30 minutes for a walk on the beach to see for themselves what people were upset about.

If they did, they weren’t letting on.

We were told the DNR is preparing a “white paper” about how it plans on dealing with the Supreme Court ruling.  Meanwhile, the agency’s leaders continue to refuse to meet with the attorneys who successfully argued the case for beach rights in front of one court after another. While politics may be local, governance in Indiana happens somewhere else.

4 thoughts on “Letter From Michiana: Indiana’s DNR keeps its head in the sand”