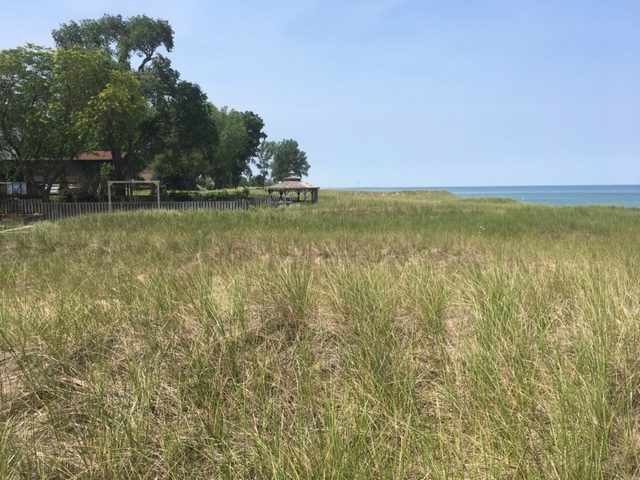 Back home again after almost a week away in North Carolina. The weather there was rotisserie hot. Blades of grass practically crackled underfoot.

The Lake Michigan shore was balmy, with a gentle breeze coming down from the north. Went to the beach in time to catch the sun, blood-orange, slipping below the horizon. There was no one else around; the only sound came from the ankle-high breakers rolling into shore, one after another. Brain massage.

We’re fortunate at our end of the beach. We still have foredunes, the deep banks of marram grass-covered sand that serve as a buffer between the beach, where the lake level has reached a record-setting height, and peoples’ lakefront homes.

Marram grass, or Ammophila, is generally associated with North Atlantic coastlines in Europe and North America. But it somehow managed to find its way to the Great Lakes and we’re better off for it. The grass’ stems, or rhizomes, grow laterally, underground, creating a kind of fibrous net, which serves to stabilize dunes, making them natural levees.

We’ve seen what’s happened further up the beach, where homeowners have recklessly bulldozed foredunes in order to make it easier to drag their motorized toys to the water’s edge or, in some cases, enhance their postcard view. Along this stretch, the surging lake has overwhelmed the beach and some homeowners have installed steel breakwaters to protect the foundations of their million dollar retreats. On some days, walking the beach is practically impossible, as waves slap walls of rusty steel.

Last Fall, the town of Long Beach passed a beach protection ordinance aimed at trying to preserve what foredunes we have left. This is particularly important in light of 2018’s Indiana Supreme Court ruling, which declared the beach public property from the water’s edge to the common high water mark — the visible line at the top edge of the beach where vegetation, which generally means the foredune, begins.

This has not stopped some beachfront owners in our vicinity from using heavy machinery to flatten the foredunes standing between their homes and Lake Michigan. It’s their property, they say, their right to do with it as they please. This, of course, represents freedom in a typically American sense: the freedom to impose one’s ego wherever one’s bank account allows.

And so, as we walked along the beach, passing foredunes turned into grassy escarpments by the restless lake, we also passed empty spaces, like missing teeth, where beachfront owners still insist on clearing away the sand and marram grass to suit their suburban notions of suitability. One had bulldozed a swath as wide as a couple of lots and even installed a brick wall to keep the sand from doing what sand wants to do — seeping, drifting and blowing back to where it came from.

This, it occurred to me, is what happens when you skip your high school English class. Surely the builder of this wall was absent the day his classmates read Shelley’s poem about a royal ruin, found half buried in the sand:

“’My name is Ozymandias, king of kings:
Look on my works, ye Mighty, and despair!’
Nothing beside remains…”