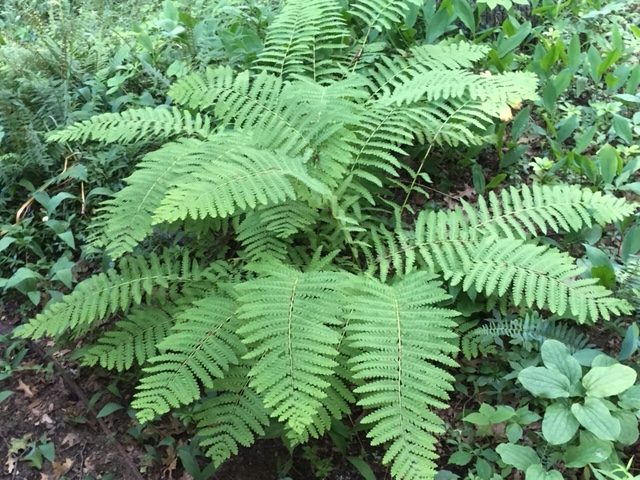 The rain took a breather over the weekend, so I was able to spend some time weeding.

At first blush, weeding in a woods might seem like a fool’s errand. If you are lucky enough to have a little land, as we do, and if your inclination is to let that land have its way, as ours is, the question, to pull or not to pull, can almost seem beside the point.

But even a supposedly wild yard is, to some degree, a managed thing. This is not a wilderness plot; people have lived here for several generations. Fortunately, as far as we’re concerned, their touch was light. Nature is what drew people here over one hundred years ago — and those people were happy to leave well enough alone.

And so we live amidst a tree community that includes white and black oaks, maples, dogwood, sassafras, and witch hazel, to name but a few of the deciduous types, plus a scattering of white pine, spruce and hemlock. There’s blueberry brush on the ground, as well as quite few ferns and a wash of wildflowers.

Since the ground is relatively undisturbed, what you’re looking at is a fair approximation of dune woodland. A couple of ridges away is Moon Valley, site of an old sand mine. A large portion of the valley was stripped of trees and bulldozed. This trauma made the land vulnerable to both native and invasive plant species. An indigenous plant like the purple-berried pokeweed took hold in force beside hillsides covered in non-native garlic mustard; the invasive bittersweet vine, a holiday favorite of home decorators, smothered remaining old growth trees.

It’s not unusual to find these opportunists around our house, their spores carried on the wind as well as the haunches of deer, squirrels and other mammals, or incidentally dropped by passing birds. All the rain we’ve had has made our land a congenial host for a number of visitors that, given the chance, have been more than happy to take over.

Which is where weeding comes in. Cat briar is a waxy leaf vine whose tendrils are covered with a wicked array of thorns — like feline claws — easily capable of scoring unprotected flesh. It’s no less nasty for being native. We had shoots of it, diabolically straining to find available hosts, coming out of the ground, all of a sudden. Boneset, a furry native wildflower, appeared in regimental numbers, outside our kitchen window.

Having never seen the boneset before, we were unsure whether this was a spontaneous gift or a nuisance. Then it shot up to waist height, putting everything around it in the shade. A shallow plant, its roots came out of the sandy soil as if they were eager to be pulled.

We have friends who make a mission of trying to get rid of as many invasive species as they can. This is an important job. Just look at the way bittersweet strangles trees or phragmites, a kind of monster grass, can crowd a wetland to the point where even birds feel intimidated.

It takes one to know one, though. As I weed, I am reminded again about the extent to which nature has become a design proposition, dependent on human agency and, I hope, humility. For, when it comes to invasive species, we are the most invasive of them all.