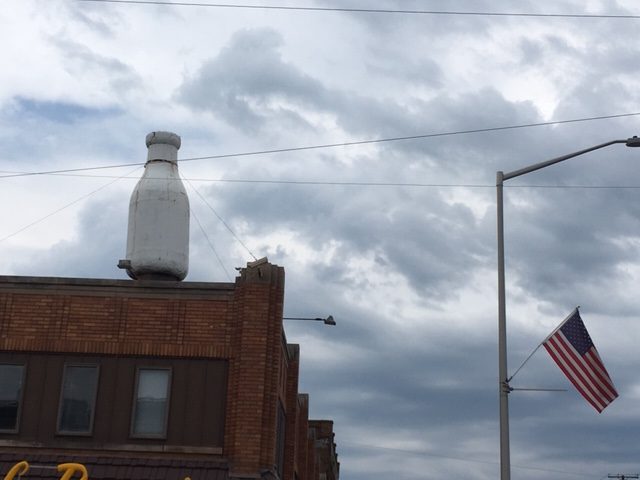 Fair Oaks Farms may not be in Michiana, but it’s close enough to make anyone who cares about food and animal welfare wince.

The Northwest Indiana industrial-scale food producer and popular agro-tourism destination has been caught in the act of animal cruelty by an undercover animal rights group. The public response to the revelations has been rapid and fierce — indicating that how we think about food and where it comes from may be changing for the better.

Fair Oaks Farms was founded by nine western dairy farming families who pooled their resources and acquired 27,000 acres of land along Interstate 65, just south of Merrillville. In 2004, Fair Oaks made a corporate decision to open its doors to the public, becoming “an edutainment center,” where people could learn about dairy farming.

I visited Fair Oaks and interviewed the farm’s CEO, Gary Corbett in 2011, while working on a book about the burgeoning Indiana food scene. At that time, Corbett talked — presciently, it turned out — about how little the vast majority of Americans knew about agriculture. “Yet,” he told me, “you can turn on the TV some nights and see these horror stories coming from agriculture because somebody snuck a camera in someplace…They put agriculture in a bad light.”

At that time, Fair Oaks was drawing over 450,000 visitors a year. Since then it has added pigs to its attractions.

Like most people who stop at Fair Oaks, I saw a calf being born in the special birthing auditorium and watched the surreal spectacle of cows being milked by machines as the creatures rotated on a stainless steel lazy susan the size of a flying saucer. The folks around me seemed impressed by the scale of everything but, frankly, the entire operation struck me as being like a concentration camp for cows.

Fair Oaks is an unapologetically massive operation. While it is owned by families, calling it a “family farm” is like saying the Ford Motor Co. is a family business. You won’t see the 30-some thousand Holsteins whose milk is being extracted grazing in the fields by I-65; they are kept in hangar-like barns and fed alfalfa and corn silage. Upon being born, calves are promptly taken from their mothers and put in wire pens with hutches for shelter.

Documentation of calves’ mistreatment is a large part of what’s gotten Fair Oaks in trouble. The public backlash has been breathtaking. Coca-Cola, which has sold Fair Oaks milk under its fairlife brand, issued a press release: “No milk from any Fair Oaks Farms locations will be included in fairlife products.”  Grocers like Jewel-Osco and Strack & Van Til pulled Fair Oaks products from their shelves. And Family Express called the images they saw, “chilling” but went further, expressing anger with Fair Oaks’ public statements about the revelations: “This is hardly the response you would expect from an organization that gets it. The minimizing of the graphic animal cruelty offers little assurance of change in a culture that is likely in need of fundamental retooling,”

Fair Oaks even suspended its home delivery service because drivers have reportedly been harassed by disgusted consumers.

Less than 50 years ago, Earl Butz, told farmers to “get big or get out.” As head of the U.S. Department of Agriculture, Butz believed the future of farming would be about industrialization and technology. His policies led to the kinds of consolidations that created Fair Oaks. Those policies also drove many farmers into bankruptcy and helped kill rural communities. Although the Farm Bureau, in Indiana and other states, still clings to Butz’s mantra, the eating public isn’t so sure.

The uproar over what’s been revealed about Fair Oaks’ treatment of animals shows that people want to know more about where their food comes from, what’s in it and how it’s raised. Some may even be willing to pay extra for products that aren’t just healthy, but come from ethical sources. Fair Oaks did a creative thing when they invited people to see what happens on a farm. But what kind of farm matters more than ever.

One thought on “Letter From Michiana: The Fair Oaks Farms Fiasco”