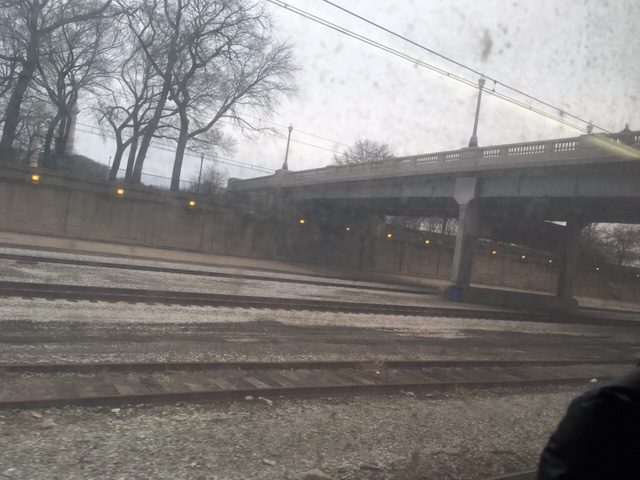 I rode the South Shore train into Chicago over the weekend. The South Shore has been in operation, connecting Michiana with the big city, for over a hundred years. The electric interurban runs from South Bend along the southern shore of Lake Michigan and delivers its passengers to a cavernous terminal redolent with soot and animal anticipation.

As a business proposition, the South Shore has had its ups and downs. Public transit is a headache for those who tally balance sheets; its benefits show up in the economic energy that tends to gather around stations and stops, the employment opportunities it provides for people regardless of where they live and the cultural relevance it helps foster among the different communities it connects.

A casual check of the license plates in the parking lot at the Carroll Street station in Michigan City, Indiana suggests how indispensable the South Shore is to this corner of the world. There are as many, if not more, cars there from southwestern Michigan as Indiana. On Saturday, a couple from Stevensville was headed to O’Hare for their first trip to England. Others, from towns like New Buffalo, Three Oaks and Sawyer, were going into the city for the museums, a sports event or a night on the town.

The ride from Michigan City to Millennium Park can be arduous. According to the timetable, a one-way trip is supposed to take about an hour and 45 minutes. But because the passenger train shares track with freight carriers, unscheduled delays are not unusual. On weekdays you’ll see conductors, like grade school hall monitors, handing out excuse slips to be turned over to bosses by tardy workers.

This, we’re assured, is going to change.

The South Shore is in the midst of plans to build a double-track between Michigan City and Gary. State, regional and local funds have aligned. Indiana’s Republican governor, Eric Holcomb, even made a glad-handing trip here — a rare sighting, given the region’s history of voting Blue. Once completed, the double-track promises to cut travel time between Michigan City and downtown Chicago to just over an hour. It will effectively turn MC into a Chicago suburb.

The anticipation in Michigan City is understandably intense. This town was pole-axed by the recession — of 1980! — which decimated its manufacturing base. It has taken a generation for many people to realize the days when a little education could earn you decent wages can’t be willed back. The prospect of the double-track has triggered civic investment and an entrepreneurial heat not seen here since the ‘60s.

But while developers are being encouraged to see the latent opportunities on offer, some of us are concerned suburbanization could efface the remarkable compound of urban grit and natural beauty that makes Michigan City unlike any other community in Michiana. MC has paid its dues, it deserves a payday. So the pressure to build is palpable but, in this day and age, that usually means turning public assets into private properties.

Mayor Ron Meer’s city administration appears to have done a decent job of keeping its burgeoning business interests in service to the larger goal of revitalization. There is a plan. But the double-track is still on the drawing board. The really heavy money has yet to lean in. How Michigan City deals with growth will affect what we think we know about this place — and what others forget — for generations.