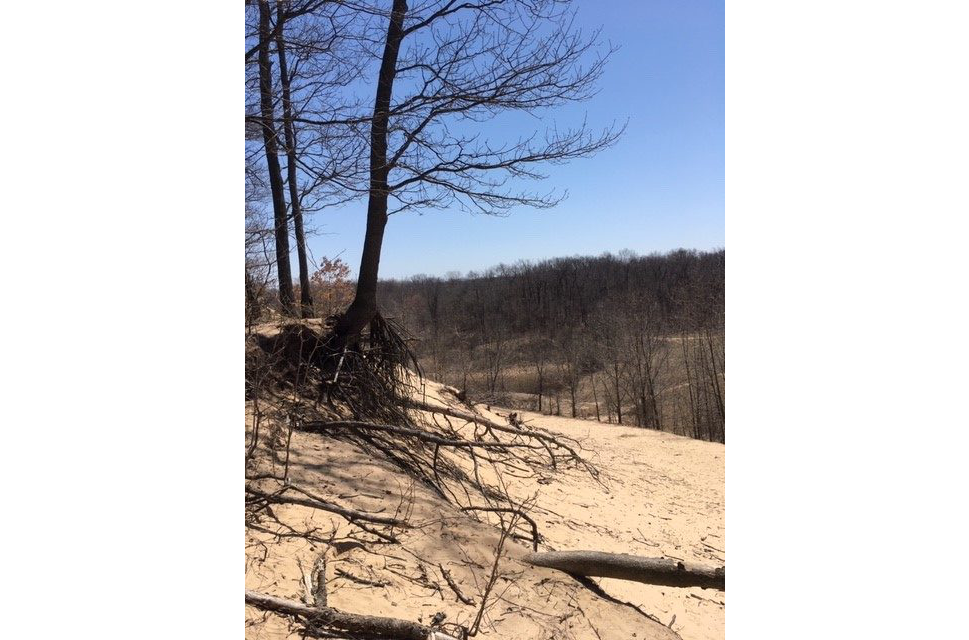 Sometimes maps fail. They can show you all the ways people have drawn and quartered a place — the lines we’ve created to show who owns what and how to get from here to there.  But a map is not a description.  You need words for that.

Michiana is a word that defies mapmakers. It describes a small but distinctive part of the world that runs along the southeastern shore of Lake Michigan.  Spanning the statelines of Indiana and Michigan, Michiana even confounds time zones.  When you step from one state to the next, you either lose or gain an hour.

Distinctions like these couldn’t have made a difference to the original inhabitants of this place.  Whether on two legs or four, they experienced a landscape created in the wake of a vast glacier.  That glacier’s footprint is Lake Michigan.

This being the Midwest, the people who settled here cleared as much of the land in these parts for farming as they could.  But the closer they got to the lake, the harder things got. There were steep slopes and sudden gullies, marshes and bogs and sand dunes.  The weather could be difficult.  Wind off the lake brought waves of rain and snow.

What they couldn’t cultivate some people called wasteland.  So on the lake’s western tip, they bulldozed the dunes and built steel mills and one of the largest oil refineries in North America. A few visionaries — progressives from Chicago like Jane Addams and Paul Douglas, and Hoosiers like Dorothy Buell — stood up for what was left.  Indiana Dunes State Park and a newly designated National Park are their legacies.

Michiana remains a beautiful place.  But like beautiful places everywhere, it is under pressure.  People have a way of finding these places and making them the way they think they should be, which usually means squeezing a big house on a small lot.  It’s like they want to be in one of those suburban home and garden TV shows, instead of a real, live place. So they cut down trees or build out to the edge of Lake Michigan to get a postcard view.  In the process, they can wreck whatever attracted them here in the first place.

This has become a particularly sore point since fewer people among us are raking in more and more money.  There have always been affluent homeowners in Michiana, but our latest arrivals represent a different order of magnitude.  It seems no house is built today without four or five bathrooms. And if, as so often happens, Mr. GotRocks’ dreams don’t jibe with local zoning codes, he’ll threaten to bankrupt his newfound town with an endless lawsuit.

All of which makes Michiana a fascinating, complicated, exasperating, ultimately enriching place.  I’m the third generation of my family to live here and I’ve seen how it can be like a theater for so many current obsessions — balancing economic development and the preservation of natural habitats, the rights of individuals and community sustainability, tradition and progress.

As I write this, I can hear the choogling of sandhill cranes flying overhead, making their annual migration along the lake. The first wildflowers, snowdrops, are breaking ground.  If winter lulled us, it’s time to pay attention.  See what’s happening, what the maps can’t say.

11 thoughts on “LETTER FROM MICHIANA”