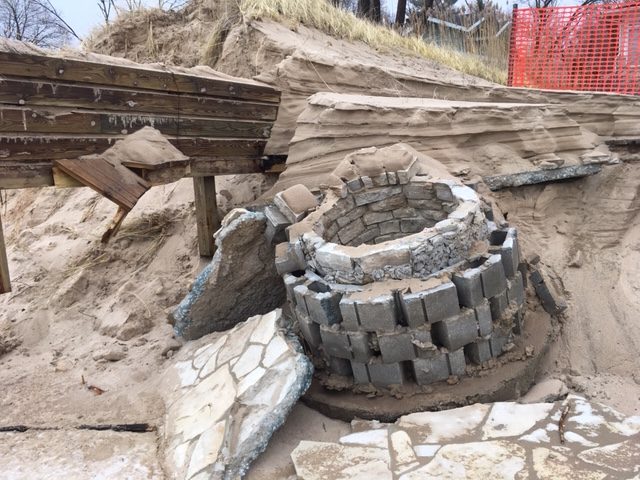 There is heavy equipment lined up on Lakeshore Drive, the main thoroughfare in my Michiana town, Long Beach. Workers are trying to keep the road from falling into Lake Michigan. What’s left of the beach in places now looks like a dump, as people have piled what they can, from parachute-sized sandbags to the concrete barriers used in highway construction, to try and break the lake’s vehemence. The president of our town council has declared a state of emergency.

The same thing is happening elsewhere along the Lake Michigan shore — in Beverly Shores, Ogden Dunes and Portage. If this keeps up, our new National Park may lose what little beach it has left. Not surprisingly, elected officials, including state Senator Karen Tallian and state Representative Pat Boy have asked Indiana’s governor, Eric Holcomb for help

But Gov. Holcomb has done nothing.

This is why some of us say we live in Michiana. Indiana appears not to care about what happens here. The State of Indiana currently brags about its $2.3 billion ongoing reserve balance. It ended its last budget year with a $410 million surplus.  Hoarding — but hardly spending — tax dollars is the Indiana way. Some Indiana lawmakers like to call this surplus cash a “rainy day fund.”

Well, it’s been raining and raining in Northwest Indiana. As much as 15 percent more than usual over the past five years or so. This helps explain why the lake has gone from a record low level in 2013 to almost unprecedented highs in less than a decade. Why flood advisories have become commonplace. Why when the wind comes down the lake, waves can reach heights of almost 20 feet.

No wonder then that Sen. Tallian turned to Gov. Holcomb for some of that rainy day dough. All Holcomb had to do was declare an emergency. But he didn’t. He wouldn’t.

Last summer, Tallian was hoping to get $1 million from the state for sand replenishment and to help fund a study aimed at developing strategies to deal with beach erosion. That money was stripped from the budget.

Holcomb kicked the shoreline can over to his state director of Homeland Security, Stephen Cox. Cox put his fingers in his ears and whistled the following tune: “To date, we are unaware of any loss of infrastructure (i.e. roads, bridges, public utilities, etc.) which would qualify for public assistance funding from federal or state disaster relief programs.”

So roads have to crumble, houses fall into the lake and gas and electric lines leak and spark before the State of Indiana can be roused from its slumber.

It’s ironic that this is happening as yet another zombie bill is being proposed to try and privatize our beaches. HB1031 would subvert the state supreme court’s ruling that Indiana beaches are an historic public trust. This exhaustively-established fact has been endlessly rankling to developers, realtors and out-of-state carpet baggers who seem to believe that scarcity makes a beautiful place even more, er, beautiful.

Perhaps this is why Gov. Holcomb won’t grant emergency funds to our beach communities. If the lake has its way, there will be no beach left to fight about.