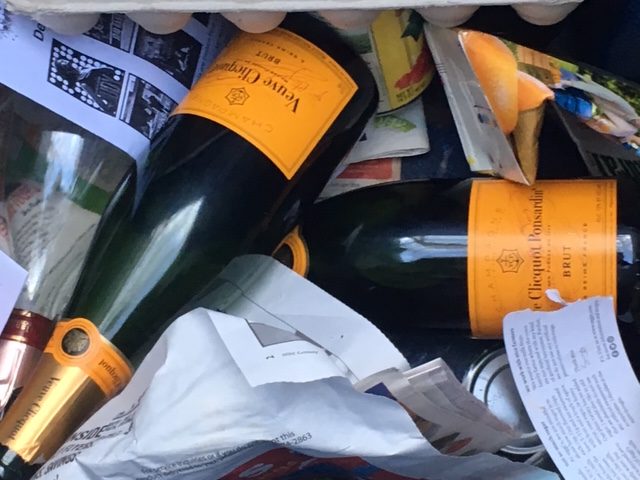 I’m not sure when we started. On New Year’s Eve, just after the ball drop, the loving kisses and the sips of champagne, my friend John and I pull on our coats and hats, fill a couple tumblers with the most sincere liquor that’s left in the bar and make our way down to the beach to toast the new year.

Anyone who cares to join us in this ritual is more than welcome. Sometimes, though, the weather’s less than accommodating. Sometimes it is awful. Our fellow revelers — meaning, in most years, our wives — regard us with that tolerance usually reserved for children who have just taken up the violin, say, or the tuba.

There have been years when conditions were practically balmy. We could saunter to the beach bare-headed, stand at the water’s edge and sip our drinks like the displaced, somewhat dissolute characters in a novel by Graham Greene. This is nice, but undeniably anticlimactic. Rough weather is better.

There have been years when the wind practically blew the brandy from the snifters we cradled between our mittened paws. Years when ice pellets polished our complexions and the cold rang our teeth like wind chimes. This year we were lucky: the air was relatively still.

Lake Michigan, though, was like a hungry dog on a short chain. John and I stood at the edge of a sheer escarpment cut into the face of what was once a gently sloping foredune, watching row upon row of whitecaps come charging out of the darkness to wash away the sand below us. Dark blue and silver clouds opened overhead; the Big Dipper shone down.

The lake has been so ferocious lately that people have piled sandbags in an effort to protect several beachfront homes. There is concern rising waters could wash out a section of the road that follows the lakefront east, from Michigan City in Indiana, to the Michigan border. John, who lives in Chicago and has had his lakeside walks there truncated by waves washing up over bike paths and sidewalks he is used to following, sipped his whisky and marveled at the surf.  “It’s wild,” he said.

We remembered a year it snowed — the flakes big and round as quarters, falling straight down and settling, like feathers, on the ground. The beach then was long and spacious, lights in houses that are now under threat glimmered obliviously in the seeming distance.

How long ago was that? We tried to calculate but the cold cramped our ability to think chronologically. The different nights, different years swam together in what, for John and I, has become a personal tradition. We made our toast using bourbon a bartender I met once likened to an upper cut: Goodbye, 2019 — enough has surely been enough of you. As for 2020, those whitecaps made it plain:  One after another after another — they pushed closer to the sand beneath our feet.