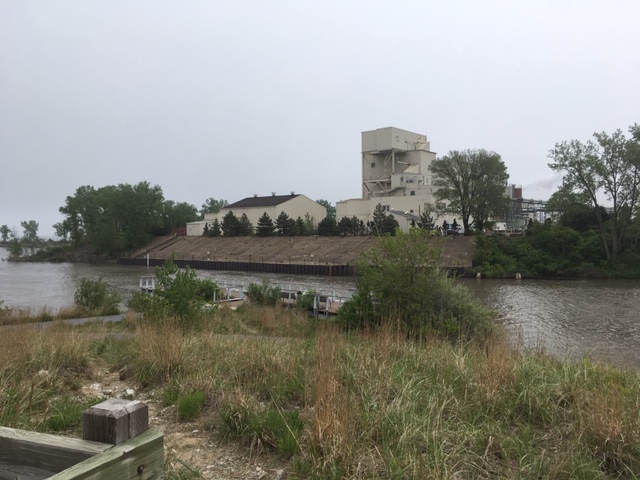 Juxtaposition, the combining of two, sometimes seemingly unrelated, things to form something new, unexpected, yet whole, is the basis for many compelling works of art. In some cases, it is the art. Haiku, for example, relies on the juxtaposition of two images for its contemplative resonance.

Lake Michigan’s southern shore is all about juxtaposition. To reach the pavilion at the Portage Riverwalk in the Indiana Dunes National Park, a site blessed with a commanding view that looks across the lake toward the Chicago skyline, you will find yourself driving between two industrial plants, one of which belongs to USS, the United States Steel Corporation.

For some, the juxtaposition of wild dune and steel mill is incongruous. They seek out nature to forget about the industrialization that, like it or not, we all rely upon to some degree. Others, though, find the situation provocative; it poses the dilemma of our age — the fraught coexistence of what we want and what we need — in the starkest way imaginable.

This dilemma was punctuated early in the morning on May 9, when a U.S. Steel wastewater treatment operator noticed what a USS spokesperson called “a turbid discoloration” of water in the Portage-Burns Waterway, a canal that runs alongside USS’s Midwest Plant and into Lake Michigan. The spokesperson, Alexis Piscitelli, continued, “the discoloration was to be due to increased suspended solids that discharged via the Final Treatment Plant.”

USS has an alarming history of spilling unwanted stuff into the lake, so news like this gets people’s attention. In 2017, the Midwest Plant was found leaking a carcinogen, hexavalent chromium. Three hundred pounds of that toxic waste went into the lake, or 584 times the daily maximum limit allowed under state permitting laws. This caused the closure of four beaches and shut down the drinking water intake for the town of Ogden Dunes for several days.

The EPA ordered USS to revise its wastewater operations and maintenance plan in 2018. But what could have been an opportunity to inspire public confidence failed, drawing fire from the National Parks Conservation Association, whose spokesman said, “U.S. Steel has failed to make changes in response to the concerns raised by the EPA and public, which suggests U.S. Steel isn’t taking this seriously.” Indra Frank of the Hoosier Environmental Council found the plan lacked detail, failed to spell out how records would be kept and included no information on how employees would be trained to respond in case of another spill.

Which brings us to that turbid discharge on May 9. The good news, according to Alexis Piscitelli, was that hexavalent chromium wasn’t involved. But as of May 14, tests for chloride and mercury were still pending. “U.S. Steel continues to emphasize the importance of reacting to any alarms and implementing corrective actions,” wrote Piscitelli.

Alarms are inevitable when you juxtapose a steelmill with a great lake. When U.S. Steel decided to build a plant in what then were sand dunes, industrialists tended to regard rivers and lakes as open sewers with a seemingly unlimited capacity for absorbing any kind of waste. We know better now. Although our economy is buoyed in part by a robust steel industry, our lives actually depend on keeping fresh water fresh.

The juxtaposition of U.S. Steel and Lake Michigan invites us to contemplate the extent to which our world is designed.  In the words of Bruce Mau, “Every accident provides a brief moment of awareness of real life, what is actually happening, and our dependence on the underlying systems of design.”

Real life is seeing U.S. Steel and a National Park inside the same frame. The story of our future depends on how we manage that relationship.

One thought on “Letter From Michiana: Turbid discoloration”